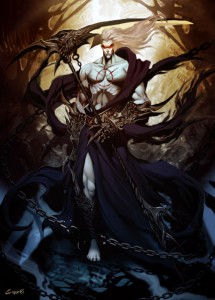 Pluto, the god-king of the Underworld, known primarily as Hades (Aidis in Greek language means invisible) was often enlisted as one of the twelve gods of Olympus. There are many traditions that prevailed in ancient Greek cities regarding the Underworld and its gods and demons. Since Homer, Hades prevailed as the biggest form of the Underworld, king and ruler of the silent world of the dead.

Hades (Roman equivalent is Pluto) was one of the three sons of Cronus and Rhea, along with Zeus and Poseidon. When Zeus, being helped by his mother, managed to cunningly outwit Cronus and resuscitate his two brothers, who had been swallowed by their father. Shortly after, a great war began. Cronus (Roman equivalent is Saturn) had the Titans as his allies, while Zeus had the Cyclops. The Cyclops supplied the three siblings with irresistible and fierce weapons. They gave to Zeus the thunderbolt, to Poseidon the trident, and to Hades the kynee (kynee means dog in Greek language), which was a helmet (or cap according to others) that made him invisible and was the symbol of the deep night. 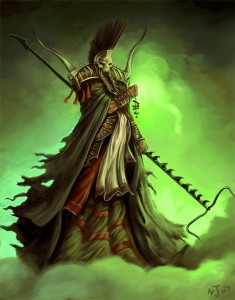 The end of the war found the three brothers as winners who decided to divide the world. This division was a draw based on luck. Zeus was lucky to be the ruler of the sky, Poseidon the sea, and Hades the Underworld. Therefore, Hades reigns in the dark world of the dead, while on the contrary, Zeus is the ruler of the upper world of the living.

The helmet (Kynee) is the main symbol of Hades' power, which signalled the deep night in which the God reigns. Kynee grants invisibility, not only to him, but also to any other god that wears it, like Athena, who thanks to this was able to help her protégé Diomedes escaping the gaze of Ares in the famous Homeric battle.

Hades always remained locked in his underground world, which was covered by still clouds and eternal fog. It was a fairly large area beneath the earth, beyond the borders of the visible world and even beyond the Ocean river. There is vegetation in this dark country, but plants do not bloom or fructify. 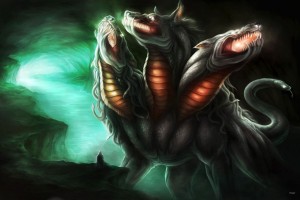 The ground is adorned by vast expanses of daffodils and is guarded day and night by Cerberus, the terrifying dog with three heads and serpentine tail. All are admitted to the Underworld, but no one could pass by this terrible guardian and return to the upper world. Only Hercules, executing the orders of Eurystheus, managed not only to pass – being alive – the gates of the Underworld, but also come back again in the upper world carrying Cerberus and presenting him to Eurystheus, thereby accomplishing his twelfth feat. After Hercules finished his feats, he returned Cerberus back to his natural place in the Underworld. 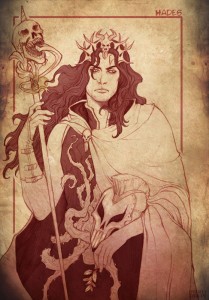 According to mythology, several heroes have made such descents to the Underworld, but not always successfully. Of the most famous is that of Orpheus, who wanted to bring his beloved Eurydice to life, accepting the condition put by Hades to not turn to see her on the way back. But Orpheus could not endure this ordeal and so his beloved returned to the World of the Dead.

The same result also had the descent of Theseus and Peirithos, who intended to steal Persephone, Hades' companion and Queen of the Underworld. Odysseus also descended to the Underworld, as advised by Hermes, just before leaving the island of Circe, and conversed with the souls of the dead.

The souls descend to Hades from the terrible rivers Acheron and Cocytus and the lakes Acherousia and Styx. These rivers are on the borders of two worlds and are surrounded by fog. Cocytus River is located in the mountains of Arcadia and Acheron is located in Thesprotia and forms Lake Acherousia just before reaching the Ionian Sea. 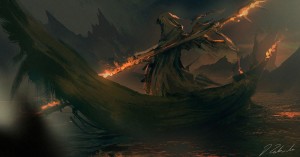 The imagination of the ancient Greeks sets up, into these rivers, the scene for the journey out to the world of the dead. Charon, the sleepless driver, is waiting at the shore, gruff and surly to convey with his boat through the fog and mud of rivers, the souls on the other side, taking as payment a donation (coin) that the living put into the mouth of the dead to pay the ferries of the transition to the other world.

Hades residents are also Keres, black deities, demons of death and daughters of night that usually roam the battlefield and give the final blow to the wounded and dying soldiers. 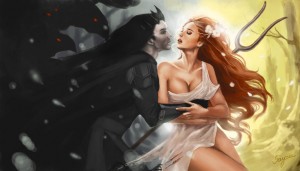 In the Underworld, the souls are judged by the grand marshal, Hades, and three fair mythical rulers, Minos, Rathamanthis and Aeacus. Therefore, depending on the discretion of the court, the righteous are lead to the Elysian Fields or the islands of the Blessed and the unrighteous to Tartarus, located in the depths of the earth and being the site of the martyrdom of the guilty. The name of Persephone is linked with the unique outgoing of Hades from his dark kingdom, when he was fascinated by her beauty and with the consent of Zeus, decided to abduct her from the Upper World. His appearance to the light was instantaneous. 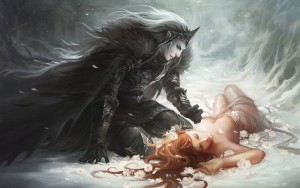 Persephone, daughter of his sister Demeter, reacted, but no one heard her desperate screams. So, Hades placed her in his kingdom and was giving her secretly pomegranate's pimples, to keep her from remembering the upper world and stay close to him. The mother of Persephone, Demeter, who did not know the whereabouts of her daughter, roamed the earth for nine whole days and nights without food, looking for her daughter's traces. When she heard about Hades' abduction, she asked Zeus to mediate and succeeded in Persephone staying only four months in the kingdom of the underworld, while the rest eight months with the gods of the upper world and people. 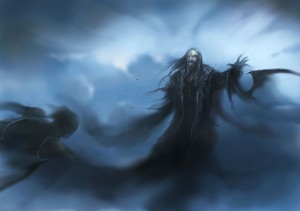 Therefore, Persephone seems to share her care between both the world of the dead and the world of the living. Just to this event, the ancient Greeks support the existence and separation of the seasons, believing that the mental state of Demeter, goddess of fertility of land and people, affecting fruiting, the eugenic and good birth.

Homer describes Pluto as "polynomial", since the people avoided referring to him by his real name, which was Hades. Even this name Pluto (Plutos means rich or offering riches in Greek language) is used euphemistically, because all the riches are coming from the depths of the earth (like trees or metals). 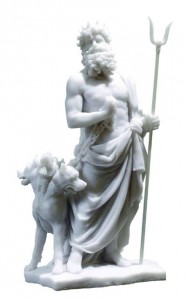 Another well-known name for the god of the Underworld is Zagreus, which means great hunter, and mainly used by the orphics, because they considered him another substance of Dionysus. He was also called also Polydegmon or Polydektis, because he was accepting on his territory all the people who died.

Since ancient times, both literature and painting were often dealing with the realm of Hades and its king himself. The god, eternally locked in his dark palaces, is represented as monstrous, fierce, crusty and stiff in every supplication.